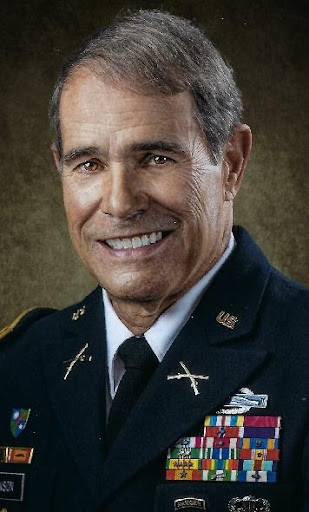 William (Robby) Robinson was commissioned from West Point as an infantry officer in 1968.  After graduation from Basic, Airborne and Ranger Schools, he was assigned as a Platoon Leader with the 173rd Airborne Brigade north of Qui Nhon in Vietnam.  He was wounded and spent 7 months at Walter Reed Hospital before returning to Vietnam in 1970.  On his second tour in Vietnam he served as an Air Assault Company Commander and then extended to become the Ranger Company Commander, both with the 101st Airborne Division near Hue.

Robby obtained a master’s degree from Harvard and then served as an instructor in political science at West Point.  His Army service continued with numerous assignments including an operations officer with the 24th Infantry Division; aide de camp at NATO Headquarters in Belgium; battalion commander at Ft Carson; and a strategist in Pacific Command Headquarters.  His final assignment was as Senior Active-Duty Advisor to the Colorado Army National Guard.

After retiring from the Army in 1996, Robby became the Deputy Director of the Colorado Department of Military and Veterans Affairs until 2009.  He is currently the Chairman of the Board of Commissioners for Veterans Community Living Centers and represents the Colorado Board of Veterans Affairs on that Board.  He is also the Co-Chair of the State Legislative Committee of the United Veterans Coalition of Colorado.

We want to keep you informed. Don’t miss our latest events and announcements.